A look at the diverging demand for lumber and timber

MADISON, Wis. – Anyone involved in the forest products business is likely to have recently faced a question like this: “What the heck are you timber folks doing that’s caused the cost of two-by-fours to go wild over the past year or so?” The question is a material one, even if the use of “timber folks” is off target.

Lumber prices have become a big topic of conversation for everyone from homebuilders to first-time home-buyers. Any effort to make sense of prices that double or triple over a matter of months leads the interpreter down a path of complications and conflicts.

Amidst Covid shutdowns, home building and renovation work is taking place at higher activity levels than at any other time in the past 15 years. Meanwhile, the U.S. lumber price index more than quadrupled over a four-year period to an all-time high of $1,670 per thousand board feet on May 7 of last year. The price collapsed to more normal levels three months later. But then it resumed a bumpy journey back up in August — passing $1,200 in late February.

Some analysts are predicting further increases as winter weather moderates in the Northern Tier states.

But these prices are for lumber—not timber.

As we know, a lot happens to a log from the point where it's “timber” until it becomes lumber that’s ready to be sold and much of what turns logs into lumber is in short supply. The same shortage of trucking capacity that has supply chains tangled also impacts the movement of logs and lumber.

Hiring is difficult for most manufacturers across the country, and lumber mills are manufacturing operations. Meanwhile, demand for “framing lumber” which is used to build new houses and renovate existing ones, is booming.

Most softwood timber prices have held steady or even declined slightly during the recent lumber price boom. In the Lake States, most pine sawlog prices, for example, have been flat during the lumber boom. For Wisconsin sawlogs, Forest Data Network’s prices have ranged within a band of about 10% over the past five years. Michigan FDN timber index prices have been similarly flat. Minnesota has been an exception, with its white pine log prices almost doubling over the past two years.

However, the Lake States are small players in the North American construction lumber market. The dominant supply comes from the Southeast, the West and Canada imports. (The Random Lengths CME index constitutes about one-third from each of those geographies.)

Softwood log prices were declining in the Southeast coming into 2021 and rebounded from an early decline that arrived with the onset of Covid in March 2020. However, Douglas fir prices jumped in the West late last year as lumber prices were rebounding.

In an analysis of stumpage and sawlog prices from a year ago, Forest Research Notes pointed out: “Western softwood log prices [had] seen some improvement over the past six months, but nothing like what has been seen in softwood lumber prices.”

The important long-term factor is demand. Much of the demand for pine and Douglas Fir sawlogs is for housing – new home construction and remodeling. New home construction was devastated by the 2008-2010 financial crisis – dropping by 78% from 2006. Demand for lumber tanked as a result, causing sawmills to close. Demand steadily rebounded but as of 2015, new home permits were still running 50% below the 2006 high number. But then demand grew steadily into a stable market and lumber prices followed suit. Having been severely burned in 2008-2010, mill owners were understandably wary of expansion. Now demand has surged in the past two years with the number of housing starts up in February, running at a level 50% higher than in 2015.

So how does this affect northern hardwood sawlog prices? The homebuilding and remodeling growth is a clear positive with products flowing into homebuilding in the form of flooring, doors, furniture and other important home products. Its impact on prices can be felt, but it is far less than the impact of framing lumber.

The housing market strength has shown up in favorable hardwood sawlog prices in the Lake States in 2021. Forest Data Network sawlog index prices for hard maple were particularly strong, gaining 6% over the previous year in Wisconsin and 25% over weaker 2020 prices in Michigan.

But the strongest gains for hard maple came in Minnesota, where prices tripled compared to weak 2020 prices. White oak prices also increased in all three states.

The hardwood effect is felt in a broader geographic area than the Lake States. The Northeast and Appalachia have experienced similar impacts. Forecon, a forestry company operating in those areas noted: “On the domestic front, the spill-over demand for softwood lumber from the Do-It-Yourself (DIY) crowd during the COVID pandemic has crept into hardwood territory, as finishing lumber has been in demand, and as furniture orders have increased as people are replacing home furnishings they’ve gotten tired of seeing while staying home. Also, home offices have increased in popularity and they need to be furnished as well.”

“Furniture and cabinetry sales remain strong, with the downside to sales not being tied to available lumber as much as the shortage of cabinet hardware supply,” Forecon continued. “Housing starts, for the most part, remain steady and strong. We continue to remain optimistic that 2022 will be a very good year for our hardwood markets!” 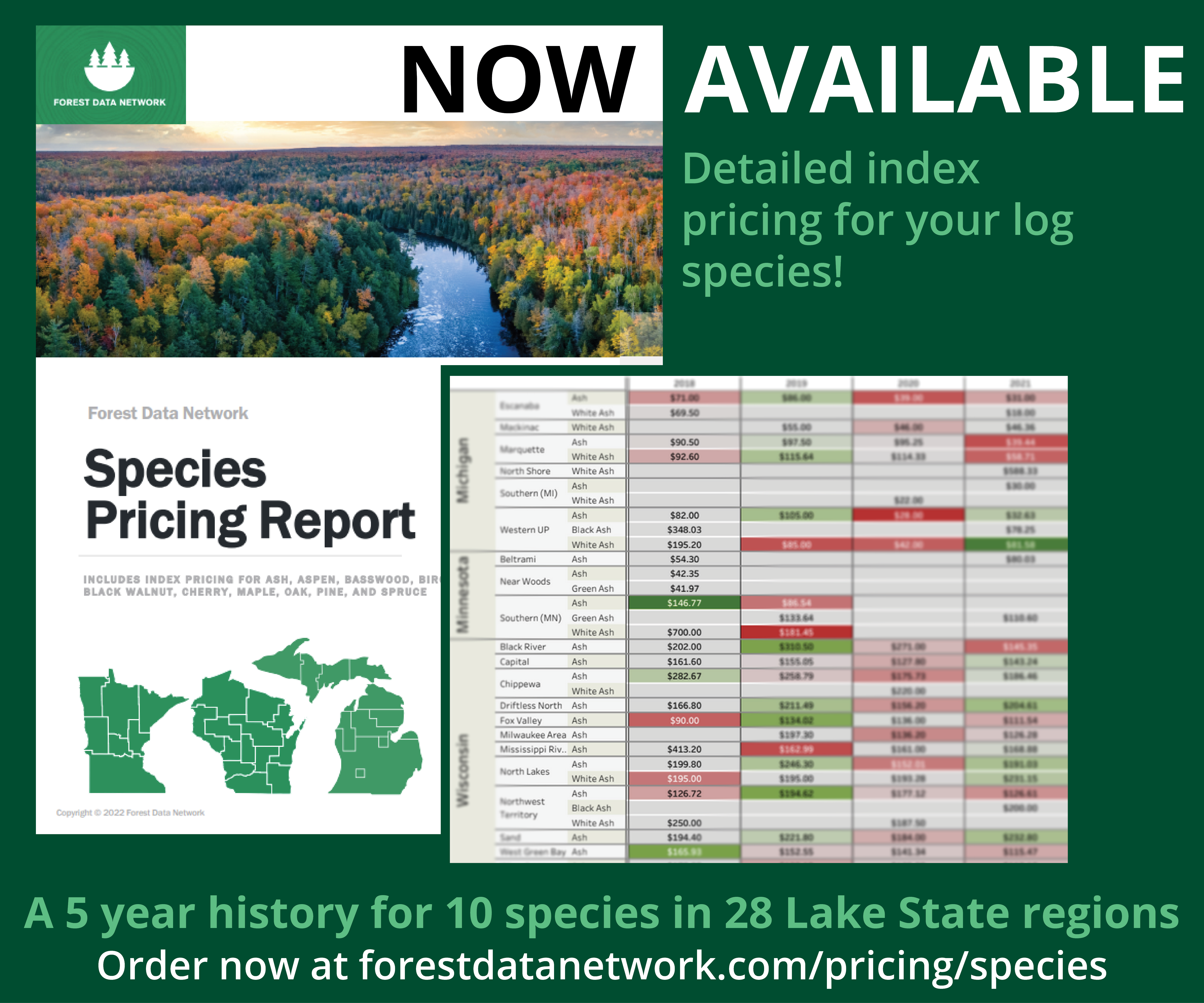